An Arizona horse transporter is accused of gross negligence after two horses were killed and five others injured after the trailer overturned in a single-vehicle accident, according to a lawsuit filed last week. 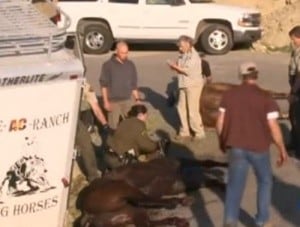 The plaintiff contracted Triple-AC-Ranch Horse Transport to haul seven horses door-to-door from Termo, California to Arizona. The suit states the seven-horse trailer, driven by Gillispie, was loaded to capacity with the plaintiff’s horses and supplies. The agreed upon trip was to take about 36-hours, but Gillispie reportedly made a detour to pick up an eighth horse in Madera. He allegedly put the equine in a storage space already packed with hay and feed.

Disaster struck when Gillispie was en route to deliver the eighth horse to Santa Barbara on Old San Marcos Road. The suit states “Gillispie lost control of his vehicle when trying to maneuver too fast on a hairpin turn on a windy and treacherous two-lane road.” The trailer overturned and the horses were tossed to the side of the rig.

The horse in the first stall was “crushed and killed from the impact and weight of the other seven horses falling on top of her.”

A thoroughbred gelding was euthanized at the scene after suffering a severe laceration to the coffin joint. As that horse laid dead on the pavement, a veterinarian held up a mare’s head for two hours, so she could breathe properly or she would have likely drowned in her own blood, according to the filing. The one-time jumper sustained bleeding from her lungs and knee injuries.

Another mare had tendons shredded in her hind legs making skin grafts necessary to cover the exposed bone. The plaintiff’s three remaining horses also sustained injuries including severe shock, according to the complaint.

The eighth horse, not owned by de Wey, suffered mild injuries and was taken to “a barn nearby where he was scheduled for delivery.”

In addition to the crash, Gillispie was allegedly transporting the horses without the proper licenses, as required by the state and the United States Department of Transportation (U.S. DOT),  for the weight of the load and for commercially transporting horses across state lines.

Despite claims to the contrary, Gillispie does not have a valid Class A license or a proper DOT identification number, according to the suit. The horse trailer’s load was also found to be 6,500 pounds overweight.

Inexplicably the defendants refuse to file an insurance claim, denying the accident took place on March 28, 2014, despite the death of the plaintiff’s two horses and injuries sustained by the others. Defendants allegedly stated, “since the vehicles were not in an actual accident we are not filing a claim.”

Gillispie’s Facebook page states he works at War Horse Ranch Horse Transport. The company, located in Colorado, is reportedly run by Gillispie’s daughter. War Horse Ranch Transport, unlike Triple-AC-Ranch Horse Transport, does have an active USDOT #2449333, however, it shows that only one declared driver and one declared rig are approved currently. The transporter is authorized to haul farm animals for hire and has a clean record to date.

The trauma and stress of the ordeal have also affected de Wey, who bred five of the horses involved in the accident. The lifelong horsewoman is suffering the ill effects of anxiety, depression, and nightmares the suit states. She is asking for a jury trial.

Three Horses Loaded An accident caused a Brook Ledge horse trailer to overturn Thursday in Kentucky. Lexington firefighters cut the trailer before three horses, including a foal, walked out on their own. Another Brook Ledge...
Read More

A single-vehicle accident involving an alleged horse-slaughter hauler leaves 19 of 37 horses dead in Mississippi. The video is shocking....
Read More

When you ship your horse with a commercial hauler, you will be handed a paper to sign. It will say “Non Negotiable Bill of Lading” or “Bill of Lading.” Here are some pointers from an equine attorney so you understand...
Read More

“He struggled so long. I can’t imagine his fear,” says Dia Frost of her daughter’s former eventing schoolmaster. “He didn’t need to die that way.”...
Read More

A North Carolina horse transporter is accused of fraud and negligence. A Missouri lawsuit states James Parlier, Jr. was hired to haul a horse that was severely injured after he turned the job over to one of his drivers....
Read More

The DOT has ordered the Tennessee-based horse transport company Terri’s Farm to immediately cease all interstate transportation services based on evidence that it is a "disguised reincarnation of Three Angels Farms."...
Read More