According to eyewitnesses, minutes before the pony died, Elizabeth Mandarino of Amber Hill Farm administered an injection to Humble.

In a police report, trainer Elizabeth Mandarino claims responsibility for her pony’s death last week at the Devon Horse Show.

The report states, “Elizabeth reported that she accidentally put down this pony, Humble, at the show.”

The 2003 Welsh gelding was reported dead to show officials on the morning of May 26th. Rate My Horse PRO broke the news story soon after.

The Bedminster Township Police report states, “Mrs. Mandarino explained that one of her horses had died [that] morning as a result of her mistakenly administering a shot in the wrong fashion to the horse which resulted in the death”. The Amber Hill Farm owner filed the report as a part of a larger complaint she made in early May alleging internet harassment.

The harassment investigation has since been closed because it did not meet the statutory requirements.

According to sources, Humble was being tacked up when he dropped to the ground and went into convulsions. Minutes before the pony died, while already in the grooming stall, Mandarino administered an injection.

Kathy Meyer, Vice President of Marketing and Communications for USEF, says the accident report regarding the pony’s death at the horse show stated, “the pony was found dead.” Meyer admits she had not heard the allegations that the pony died at the end of a needle, but said the steward followed the correct procedure in reporting what he was told.

Steward James LaHood filed the report. Initially, he had no comment regarding the matter. When pressed regarding the specifics of the situation, LaHood became chafed saying, “That is my report, it is confidential. She cannot give you that information and I will have her job – I will have her fired”.

“To report to the Federation details of injuries relating to both humans and equines on the official Accident/Injury Report form provided by the Federation. In the event of a fatality, the Federation or weekend on-call number must be notified as soon as possible but not later than 24 hours after the incident.”

The rule does not state accident reports are confidential.

A necropsy has reportedly been ordered by Mandarino.

Dr. Kent Allen, Chairman of the USEF Veterinary Committee, Drug and Medication Committee, and FEI Medication Subcommittee has no specific knowledge of this incident, but explains what may be found during the necropsy. In the event of a sudden death, it can be challenging to detect certain substances. “If you can’t find abnormal levels it doesn’t mean something wasn’t administered.”

In the necropsy, they are looking for evidence of venipuncture, in other words, evidence of an IV injection site. Dr. Allen says horse owners should not be administering IV drugs to horses and cites one of the numerous problems the untrained injector can encounter. “Injecting drugs mistakenly into the carotid artery can lead to a violent and immediate death.” He advocates for education and the responsible use of injectable drugs for therapeutic needs or under the supervision of a vet.

Meyer says the USEF will request a copy of the results for the safety committee to review. Ultimately it will be Mandarino’s choice if she decides to hand over the information. Mandarino is not currently being investigated by the USEF in connection with the pony’s death. Meyer says, “in order for there to be an investigation, a protest must be filed stating that a USEF rule was broken”.

If an official protest is not filed by June 13th, the incident could escape further review.

Note: The names of the accused have been redacted from the police report (below) since the police determined no crime against Elizabeth Mandarino was committed. 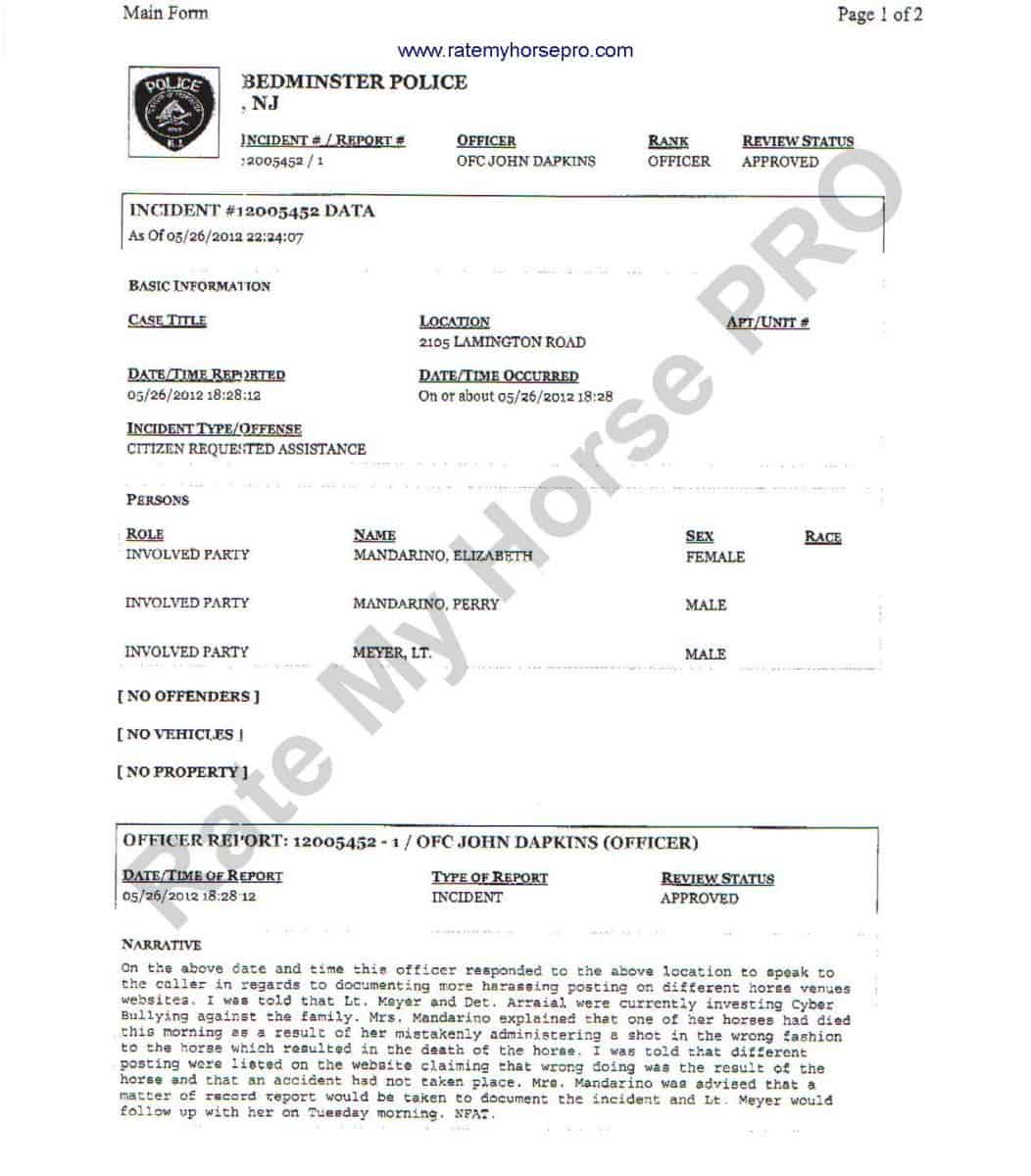 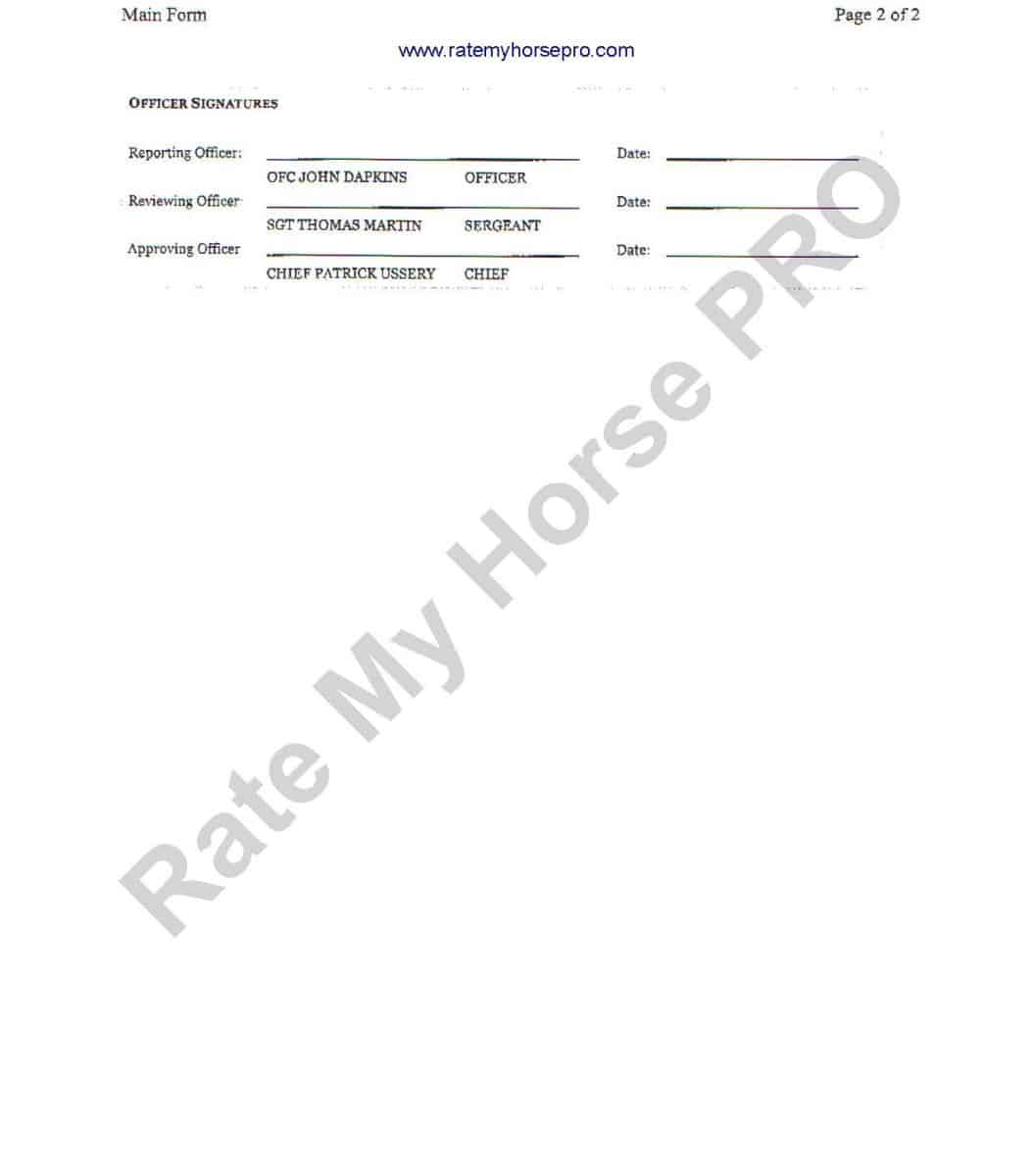 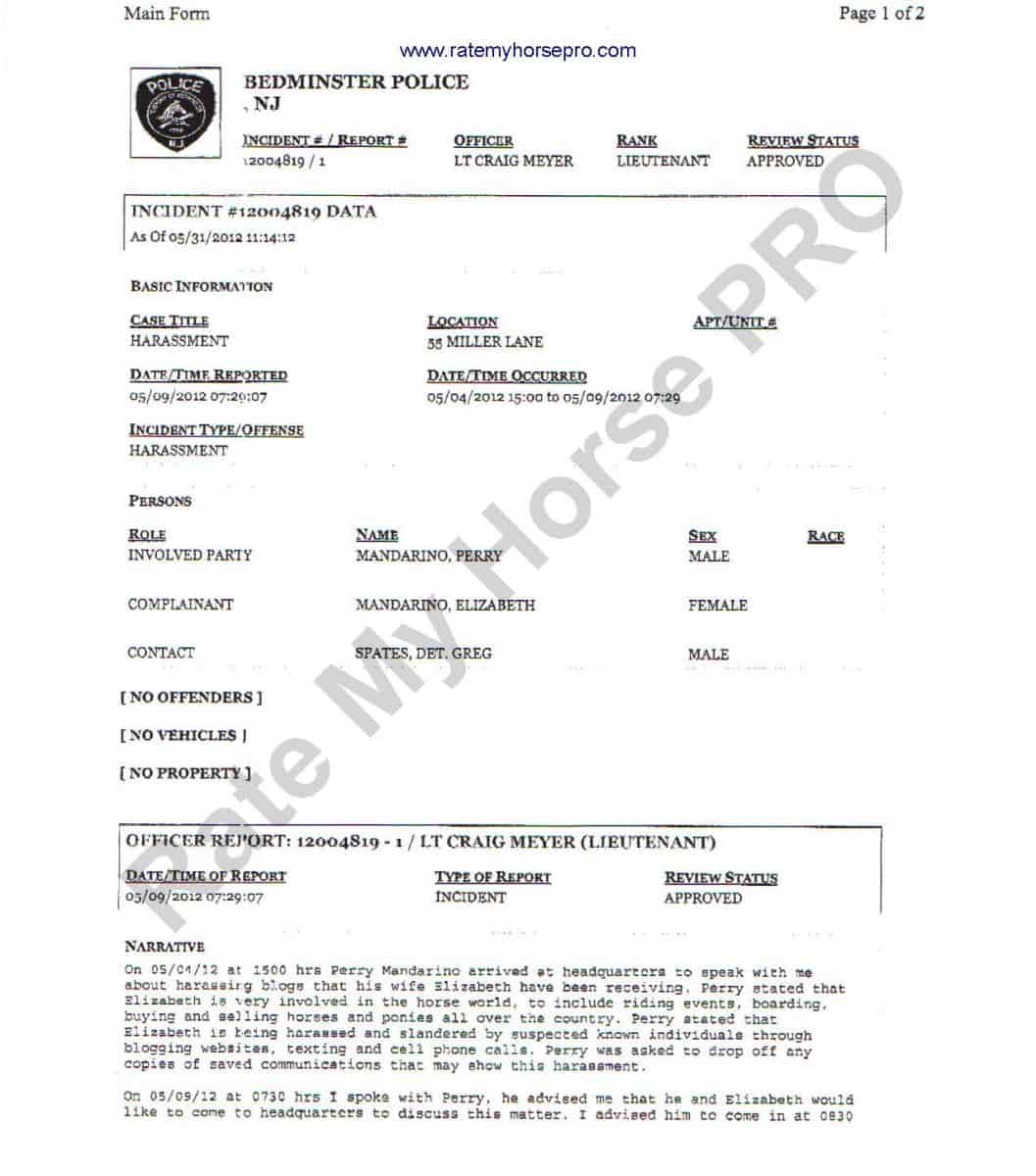 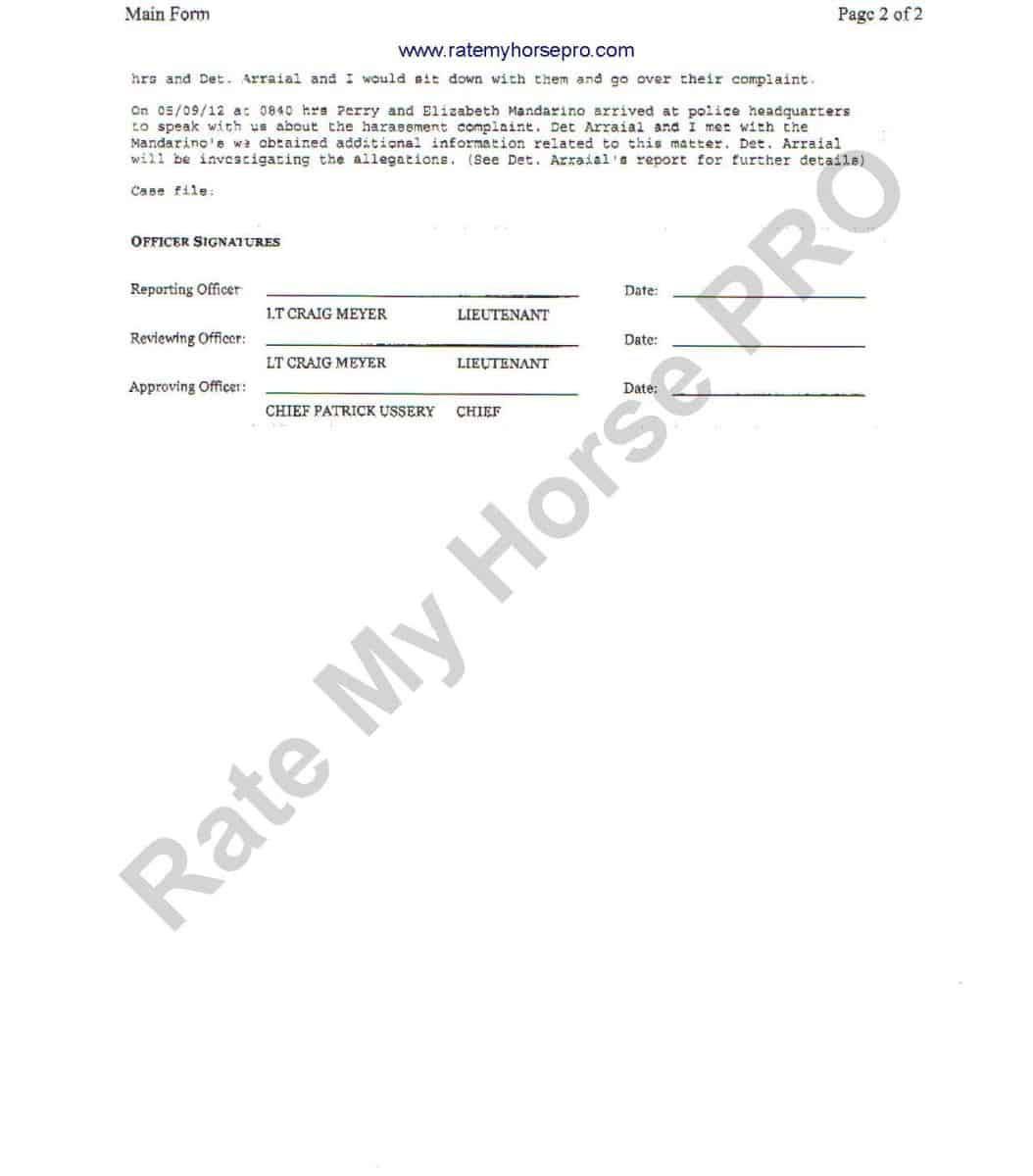 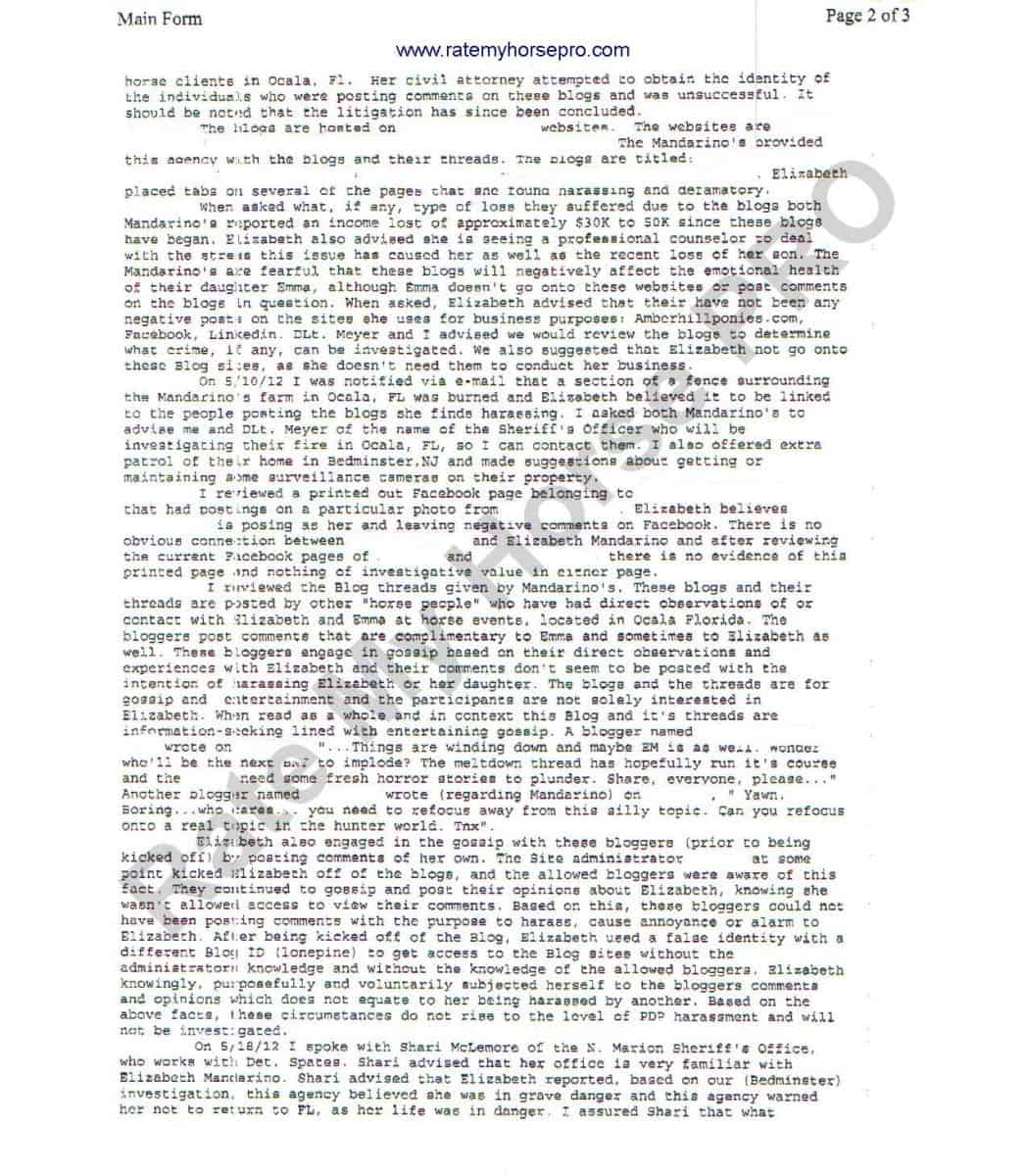 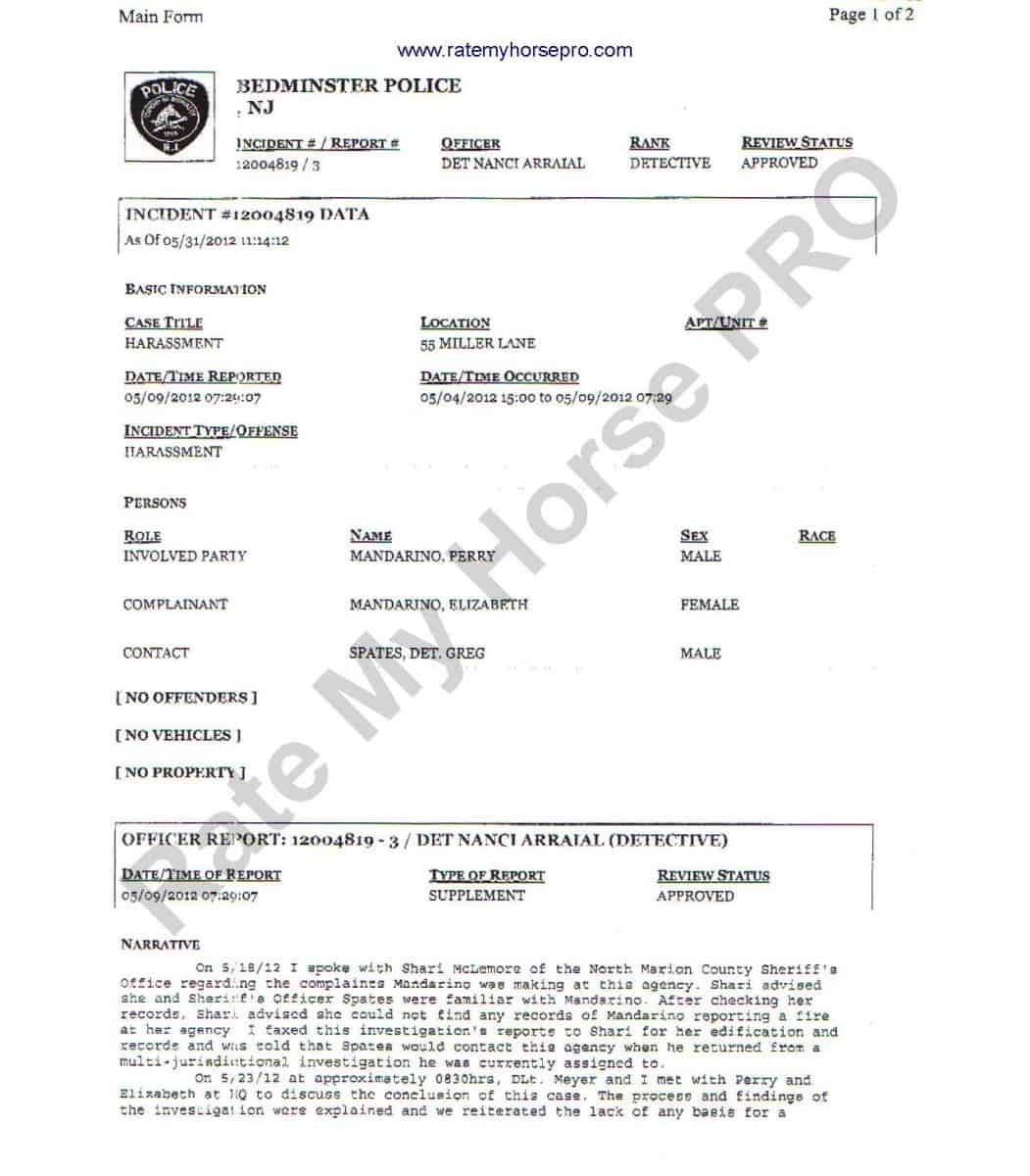 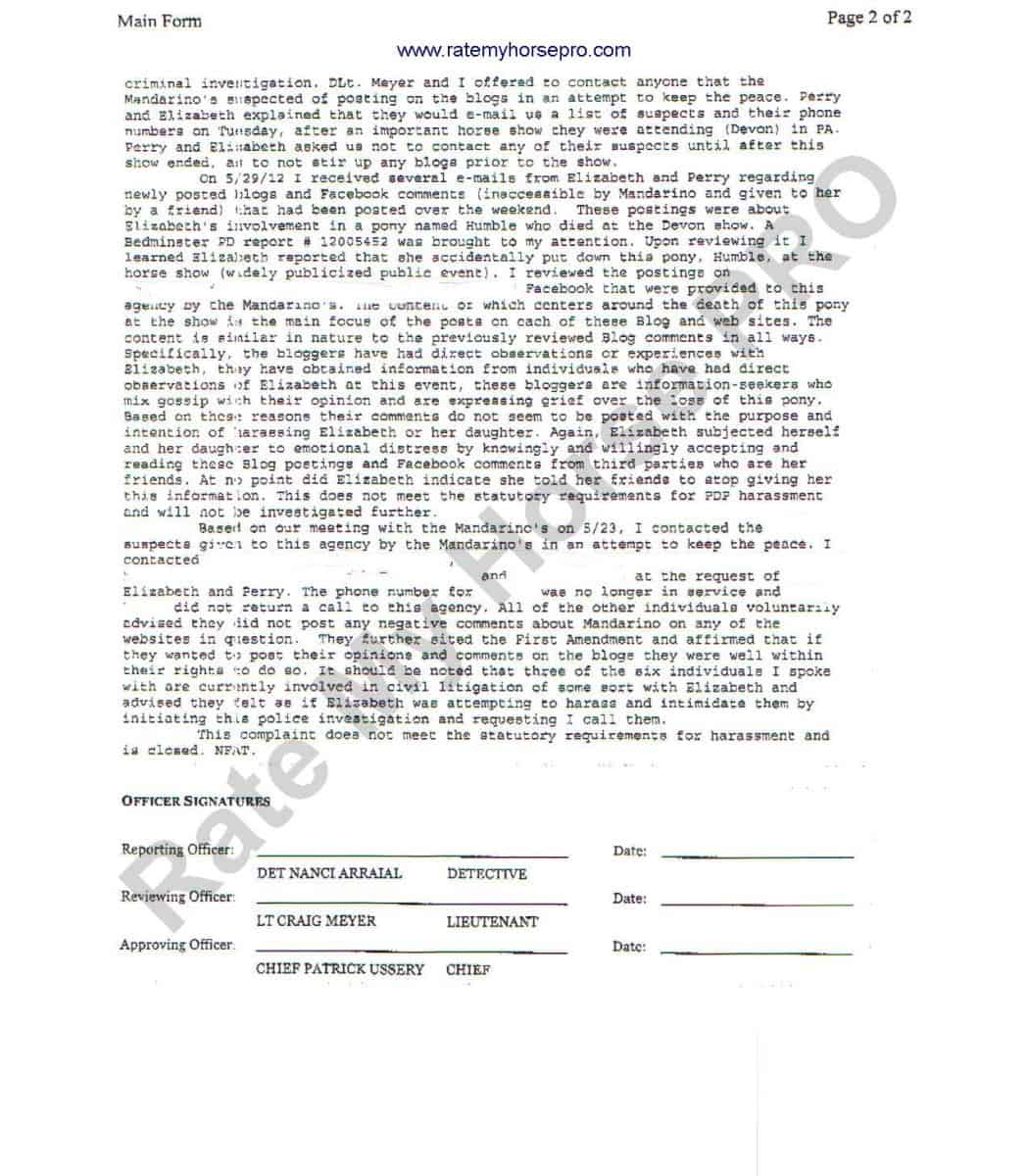 Our team broke the news about the pony Humble dying which led to the New York Times front page article in December 2012.

As amateur equestrians, the journey is satisfying, although sometimes overwhelming. When something doesn't go as planned at a horse show, there is no one waiting to tell us what happened ringside. There is no horse professio...
Read More

California's top attorney announced a jury verdict of almost $8.8 million in favor of the state against equestrian turned lawyer Gina D. Gregory and her immediate family for scam charities. It comes after they fraudulently s...
Read More

Sisterhood of the Traveling Breeches

For the past three years, I've been ringside with my sister, McKenzie, coaching her at home and during show jumping competitions. So, how did we get here? ...
Read More

The U.S. Food and Drug Administration warns that exposure when treating a horse with synthetic progesterone may cause serious health risks. The drug, marketed as Regu-mate, may cause adverse events, some of which have occu...
Read More

The United States Equestrian Federation (USEF) announced it is raising membership fees $25 to $80 - along with another fee increase....
Read More

USOC dismisses a complaint brought by Larry Glefke and Kelley Farmer against the USEF due to a procedural issue....
Read More

Focus on Depo-Provera and Horse Showing

What is best for the horse? Questions surrounding Depo-Provera remain after a workshop held by US Equestrian last week. The Federation is considering a possible rule change regarding the administration of compounded Depo-Pro...
Read More

The man desiring to build equestrian sport at the grassroots level is out of the United States Equestrian Federation. The Federation announced Tuesday that Chief Executive Officer Chris Welton is leaving his position....
Read More

USEF Back to Court for Drug and Medication Policy

The United States Equestrian Federation is facing an administrative hearing arising out of the association's anti-doping provision for therapeutic substances. Petitioners connected to the hunter/jumper mare Fonteyn, are aski...
Read More

A New Jersey jumper trainer was kicked out of the Hampton Classic Horse Show after being accused of horse abuse. National competitor Devin Ryan, of River Run Stables, was turned into stewards by an alert schooling supervisor...
Read More

The United States Equestrian Federation (USEF) has opened an investigation into the death of Scott Stewart's horse after it died mid-course at the Devon Horse Show last weekend. Cambridge was competing with Emma Kurtz in the...
Read More

The talented equine named Cambridge was competing with Emma Kurtz in the small junior hunter, 15 and under class, at the time of the fatal fall....
Read More

Is Faulty Science to Blame for USEF GABA Ban?

The Knych Study showed no evidence to support USEF's claims that GABA calms or produces any other effects that are likely to affect a horse's show performance. Read the complete GABA study....
Read More

The United States Equestrian Federation has announced a moratorium on Federation-generated protest measurements for the 2015 competition year....
Read More

A Florida lawsuit accuses show jumping’s Holger Hetzel of fraud, civil theft, and professional negligence. The plaintiffs are seeking more than $1 million in damages and injunctive relief for the return of one of their hor...
Read More

Lab results show a sample of equine feed manufactured by an Alltech subsidiary ﻿was contaminated with two toxins deadly to horses....
Read More

A new rule taking effect next month means no horse or pony competing at United States Equestrian Federation shows can be injected 12-hours prior to stepping foot into the ring....
Read More

The 2013 US Pony Finals officially kicked-off on Tuesday with Green Hunter Ponies and Medium Regular Hunter Ponies taking their first steps towards National Titles in the US Hunter Pony Championship presented by Sallee Horse...
Read More

USEF: Time to Do Right By Our Horses

"We all know things are going on. Lets deal with it," said US Eventing Team Coach David O'Connor. United States Equestrian Federation officials say we are at the beginning of taking a "honest, clear look at ourselves" to see...
Read More

A New York Times exposé about a pony's death at last year's Devon Horse Show left USEF seeking more answers than it could provide. Although members are told the group ensures horse welfare, the case proved the organization ...
Read More

The United States Equestrian Federation (USEF) announced Thursday that the next Town Hall Meeting will be a live and interactive broadcast to connect the greatest number of people....
Read More